The impact investing industry is full of success stories: stories about impact investors thinking differently about the power of their capital, stories about entrepreneurs with exciting new ideas, and stories about the end consumers who benefit from fresh solutions. But here, for the first time, the GIIN is weaving together all three of those perspectives. In the story below, we invite you to get to know Leela, a small business owner in southern India; Hardika, a financial inclusion leader with a personal calling; and Geoff, a pioneering impact investor. 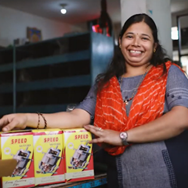 For Leela Venkatesh, necessity was the mother of re-invention.

Leela and her husband live in Bangalore, the largest city in the southern Indian state of Karnataka. Her husband was a partner at a factory, until the 2011 recession in the Indian economy stopped all its production.

“For six months, we didn’t do anything,” says Leela.

During that down time, a friend introduced Leela to the production of electric and AC motors, and inspiration struck. In 2013, they started a new motor manufacturing business, Speed Motors, in their home with no employees.

“It was tough in the beginning because there was no help or support,” says Leela.

The entrepreneurial couple’s business soon began getting traction. But Indian banks can make it complicated for very small businesses to get the loans they need to grow, and Leela and her husband had limited collateral.

That’s when they met a representative of Kinara Capital, a socially responsible fintech company that provides collateral-free loans to small business owners in the range of USD $3,000-$30,000.

Now, their small business has grown even larger.

The lives of Leela, her husband, and their employees have been transformed by the growth of Speed Motors – and they are not the only customers who have been positively impacted by Kinara’s lending. Since 2011, Kinara has disbursed more than 60,000 collateral-free loans across 90+ cities in India.

Kinara Capital is addressing the multi-billion-dollar credit gap in India and has been able to expand its operations, in part, thanks to impact investments. Impact investments help generate big social or environmental benefits – like creating jobs, increasing community health, fighting climate change, and reducing inequality – alongside a financial return for the investors.

For Hardika Shah, the founder and CEO of Kinara Capital, the work is personal.

Growing up in a middle-class family in Mumbai, Hardika saw many budding entrepreneurs in her family on the “fringe of inclusion” that she sees today among Kinara’s customers. Her mother owned a small business but struggled to keep it afloat when she needed working capital.

Eventually, Hardika moved away for her undergraduate studies in the United States and built a career in management consulting. During a visit to India years later, she saw that small businesses were still facing the same struggles that her mother had faced earlier, despite the vast economic growth in the country.

“I have found myself always on this fringe of inclusion-exclusion,” Hardika says. “So I really know what it means to be an underdog.”

In India, the credit gap between microfinancing and traditional bank lending – often called the “missing middle” – is estimated to be more than USD $300B, according to the World Bank. In 2011, Hardika founded Kinara with a focus on including the excluded: the micro and small business owners, like Leela and her husband, who are left out of India’s traditional banking sector.

Kinara finances this “missing middle” with fast and flexible loans. Business owners use the capital for everything from purchasing raw materials, buying new machinery, machine repairs, renovation of premises, or product/market expansion needs.

“The part where financial inclusion is important is for the small businesses on the fringe, where these entrepreneurs who have very little, who have staked almost everything to start something of their own – and who need that one push –  that one little helping hand – and are often finding themselves stranded,” says Hardika. “That’s where innovation is needed the most, for an under-served and under-financed group, and that’s where you can drive genuine high-value social impact.”

Recognized as ‘Bank of the Year-Asia’ by the World Bank for its innovations in SME lending, Kinara’s proprietary risk-assessment methodologies with data-driven decisioning has led to a speedy, paperless approach that makes it possible for an applicant to go from loan approval to loan disbursement within 24-hours.

This combination of innovation and disruption has proven to be a sustainably profitable model for Kinara. The firm doubled its top-line and bottom-line from FY 2018 to FY 2019.

And Hardika says, Kinara’s success also means success for its entire ecosystem: the workers who rely on the wages from the small businesses that Kinara finances and helps expand; and the business owners, who now can build a credit history to improve their creditworthiness.  According to the firm, the cumulative impact of the loans has led to an additional USD $100M in income for its small business entrepreneurs and has created or sustained a combined 250,000 local jobs.

Like other successful impact investments, Kinara has done well for our world while also doing well financially. And Hardika says, the success would not have been possible without partners who appreciated her vision – including one of Kinara’s first funders, Patamar Capital.

“One of the things about being trying to affect a systemic change is finding the right partners,” Hardika says. “Patamar Capital was one of our early supporters and continues to be one our most ardent supporters. Patamar led our first round of equity. They believed in my idea just as much as I believed in my idea. Mission alignment is critical when you are trying to create both financial ROI and social impact.” 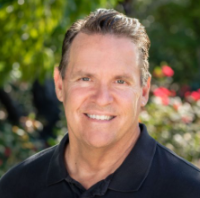 As co-founder and partner at Patamar Capital, Geoff “Chester” Woolley led the team that believed in Hardika’s idea. In fact, his investment in Kinara was among the firm’s earliest investments.

Geoff and his Patamar “family” pride themselves on their work to deeply understand the local ecosystems of the South and Southeast Asian markets in which they invest venture capital.

That on-the-ground savvy allows the team to recognize potential investees, like Hardika, who possess the regional intelligence and customer knowledge that is required to build a truly successful company.

“Our family is all about keeping everybody close, and keeping us down to the ground, and understanding what the problems are,” says Geoff.

Geoff’s work at Patamar builds atop more than 30 years in venture capital investing, including managing more than $2 billion in investment capital as the founder of successful venture funds in the United States, Europe, and Asia.

His 2011 founding of Patamar Capital – formerly known as Unitus Impact and a subsidiary of Global Impact Investing Network member Unitus Labs – marked a culmination of those decades of work.

The firm invests in tech-enabled companies and platforms that serve “mass market” consumers – some 1.6B low and middle-income people in South and Southeast Asia. Its investee companies are generally small and medium-sized enterprises, the businesses which account for the majority of economic activity and future growth on the continent.

“Patamar really is doing what I would consider classically good, traditional venture capital work,” says Geoff. “And it is actually focused on things that can help people.”

The firm’s social impact now speaks for itself.

Patamar has 20 companies in its investment portfolio, located across seven countries throughout South and Southeast Asia. All told, its work has improved the lives of some five million people through increase in income, savings, or access to life-enhancing products and services.

But Geoff and his team do not believe that deep impact requires investors to sacrifice top tier returns. The firm’s decade-long track record of growth helps to prove the point: Patamar now manages more than USD 100 million in assets.

By remaining attentive to overlooked markets and maintaining its “down to the ground” approach, Patamar demonstrates the power of impact investing – intentional, measurable social and environmental benefits alongside financial return.

About the Global Impact Investing Network

The Global Impact Investing Network is the global champion of impact investing, dedicated to increasing its scale and effectiveness around the world. Impact investments are investments made with the intention to generate positive, measurable social and environmental impact alongside a financial return.